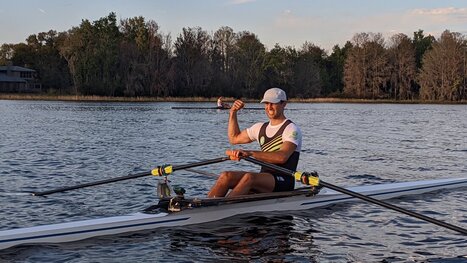 Kevin Meador, who represented USRowing in the 1x at last year’s World Championships, showing off the team’s new RegattaSport racing unisuits while training in Florida.
March 29, 2020
Just two weeks ago, the men and women of the Green Racing Project were finishing up super-compensation phase of training in the lead-up to Olympic Trials I in Inverness, Florida… and then the dominoes started to fall. As the reality of the effects of COVID-19 started to set in, it became clear to USRowing that it would not be socially responsible to hold Olympic Trials in the months of March and April. This was the first “phase” of postponement for our Summer Olympic hopefuls, with other phases following rapidly each day after.

Within a span of three days FISA, the governing body of World Rowing, canceled all three World Cups and the Final Olympic Qualification Regatta. The outlook for qualification as well as the Olympics themselves started to look quite complicated across all summer sports, and it wasn’t long before governing bodies of USA Swimming and USA Track & Field called for the postponement of the games. Just a day later, Australia and Canada became the first two countries to “drop out” of the games as a symbol of social responsibility. And finally, on Tuesday March 24th, the Japanese Prime Minister announced the official postponement of the games to no later than the summer of 2021.

​The Green Racing Project packed up their camp in Florida and headed north after the announcements by FISA on the 15th. Coach Whelpley decided it would be a safer and healthier environment for the team to be back at home in Vermont. Since arriving back on campus, the GRP rowers have been following strict quarantine guidelines at COC and have been operating out of their houses and doing what they can to maintain fitness under the current Vermont stay-at-home order. 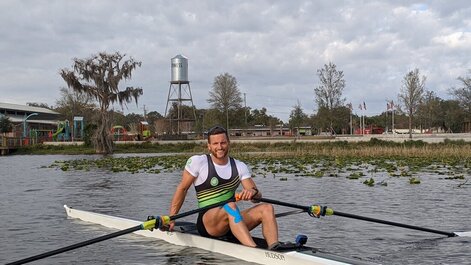 Wes Vear in the new RegattaSport unisuit… at least they were used! With the possibility of summer racing up in the air, we are congratulating Wes on his career as he will enter Medical School in August.
As for next steps, the team is still awaiting announcements from FISA and USRowing in regards to possible summer racing opportunities. These are unprecedented times for our athletes, as many had chunked out their lives with this year being their athletic apex followed by a transition year. This month will be one of decision making, with many athletes leaning toward going for “one more big one” and others who will be hanging up their oars, like Wes Vear, who will be heading to Columbia Medical School in NYC in the fall.

​This is definitely an emotional experience for our athletes - with some uncertainty, excitement, doubt, and positivity. “One thing is for certain, and that is that I am proud and thankful to be a part of such an amazing community like the COC because we always work toward doing the ‘right thing’ and that will pay dividends as we band together to fight this pandemic and eventually look toward our personal goals.” - Alex Spaulding

Land use Agreement between the City of Negaunee and U. P. Rowing

April 25, 2018
The City of Negaunee and U.P. Rowing are pleased to announce that both entities have entered into a land use agreement. The two-year agreement allows for the rowing club to access part of the Teal Lake shoreline near the old waterworks building to store some of their rowing shells. The club will be working to develop interest in this sport in the Negaunee area. “This is a great opportunity to partner with an organization that offers a unique type of water sport that can be supported on Teal Lake, City Manager Heffron said.
Teal Lake is unique, it does not allow for motor boats to be operated except specific circumstances. “I have been approached by many residents that want to find other ways to use Teal Lake for everyone to enjoy.  This is just the start,” Heffron said.
U.P. Rowing is a non-profit all-volunteer club. Since 2004 U.P. Rowing has provided public group outdoor recreation in the sport of rowing in the Marquette area. Volunteers provide specialized training, access to equipment, and safety measures to the public and its members to experience group rowing.
Programs are open to adults ages 18 and over who are interested in sweep rowing and sculling. They also run a youth program for high school students. Some of these youth have gone on to row with collegiate crews and the Summer World University Games.
The club hosts an annual regatta each September on Teal Lake where approximately 100 rowers participate. “In working with the Club, the City wants to find ways to develop the regatta into a day-long family event that everyone can enjoy. “This event is just another way to showcase beautiful Teal Lake,” Heffron commented.
“Our hope is to work with the City to establish a core of rowers on Teal Lake. We feel this is a great opportunity for our members and those who want try rowing”, commented Sally Davis, a board member of U.P. Rowing.
According to Davis, there are already a number of rowers that utilize Teal Lake for single sculling.  Having a dedicated storage and launch venue will allow the club to expand rowing in the immediate area. The Club will store their equipment on the shoreline for several months and will remove it during the Pioneer Days annual fireworks show and at the end of the season.
To learn more about rowing on Teal Lake, contact the U.P. Rowing at gbrayden@charter.net. A Learn to Row program will begin in June.  Those interested can attend a Meet and Greet on May 21, at 6pm, at the Ore Dock Brewing Company in Marquette.
Questions concerning this release may be directed to the attention of the City Manager, Nate Heffron at 906-475-7700 ext. 11, or Sally Davis at daviss@chartermi.net 906-226-3621.

October 9, 2018
Marquette, MI - Wes Vear, a former UPCRC youth rower and Marquette native, rowed to first place in the men's double at the U.S. Pan American Games Trials, August 20 on New Jersey's Mercer Lake rowing for Craftsbury.  After rowing and swimming at MSHS, Vear rowed four years for the University of Michigan and in 2015 he rowed for the USA taking gold in the men's eight at the World University Games. ​ 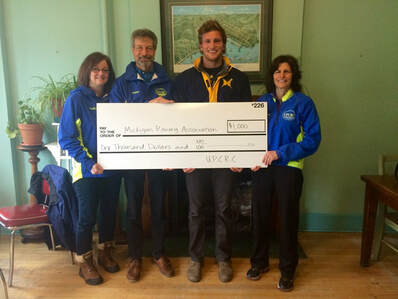 March 15, 2015, Wes Vear accepts a donation from the UPCRC to the Michigan Rowing Association.

Former U.P. Rowing youth rower, and current U of M rower Wes Vear will, along with 24 other men, represent the USA in rowing at the 2015 World University Games in Gwanju, South Korea. The games are July 3-14. The 25-man squad, led by U of M's men's rowing coach Greg Hartsuff, will depart the US June 28, and arrive in South Korea June 30. The rowing competition will take place July 3-5, and the crew returns to the US July 8.

Each athlete is responsible for covering their portion of the trip, and Hartsuff estimates the 11-day trip to cost each athlete four- to five-thousand dollars. Your tax-deductible donation to the Michigan Rowing Association can help offset that burden. Please visit the USA 2015 Universiade Men's Rowing Team Home page to find out more.

UPDATE: Click here for a link to live streaming video of the venue and race. 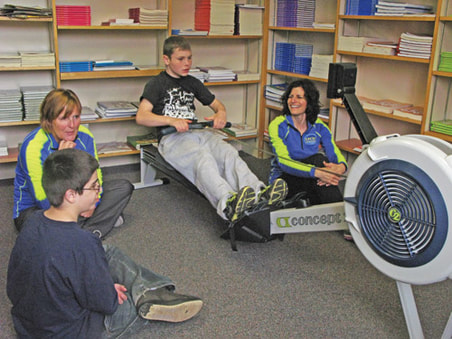 It's teaching them responsibility and leadership, with a focus on students with special needs.

"They help each other get on the machine, if they're limited with their feet, they help them put their feet in there," said Ann Piereson, a special needs instructor at Bothwell and a member of the Upper Peninsula Community Rowing Club board. "They set it up. They clean it up afterwards, so they're learning to care for each other and for the equipment."

The rowing club was instrumental in bringing the rowing machine - referred to as an ergometer, or erg - to the middle school.

Debi Cook, also a rowing club board member, authored the successful grant, which was written for the Marquette Community Foundation's Youth Advisory Committee.

The YAC is comprised of area students in sixth through 12th grades.

Cook said she was first turned onto the idea of introducing an erg to kids with special needs by the rowing coach at Michigan Tech University.

She said several studies have shown the benefit of offering ergs to kids with special needs.

"There's a lot of studies that have been done in Europe and the UK, working with kids of all different abilities and what a great thing the erg is for them," Cook said. "A lot of kids can't participate in a traditional phys ed class, so I decided to, on behalf of the rowing club, get permission to use our name to do it."

Cook said she wrote a grant for three machines and was awarded the funds to purchase one.

"Ultimately, I have this dream of having at least one - but I'd like more than one because it is social for these kids - in all of the schools," Cook said. "I would like to see it all the way through Marquette County."

Piereson said the grant allows for the use of the machine in the middle school during the school year, with students with special needs stopping by her classroom a couple times a week to use the machine during her prep hour.

"It started off with two boys, now we have a group of about 12 that like to use it regularly," Piereson said. "It's worth it, when you see how far they've come."

Piereson said some of the students were wary about using the machine at first, but after spending time learning how to use it properly have taken to it with amazing speed.

One of those students is Tyler Melchiori, 10, who said he likes to use the machine because it's good exercise.

Piereson said Melchiori took to the erg quickly and enjoys showing the other students how to use the machine, as well as how to care for it.

Even in the short time the erg has been available to them - since February - Piereson said she's noticing a change in the students, who are tasked with setting it up, signing in to use it, then cleaning the entire machine before putting it back in its place in the classroom.

"It's been wonderful," Piereson said. "It's a chance for the kids to learn to work together as a team."

The erg will remain at Bothwell until the end of the school year, when it will be moved to the UPCRC's clubhouse, where it's youth rowing club will have the chance to use it during the summer.

For more information on the rowing club, visit www.UPRowing.com.